A member of I.A.T.S.E Local 798, Gaby is a Makeup Artist specializing in beauty and special effects makeup (SFX) assignments. She is based in Atlanta, Georgia now and has worked in the state’s burgeoning film and commercial industry. Her experience includes working on independent films, music videos, print, editorial and live theater.

Gaby’s love of makeup artistry and special effects makeup started off at a very young age. As a little girl growing up in Miami, she would sit at the edge of the tub watching her mother do her older sisters’ make-up. When she saw the 1986 film FX in theatres, it opened her eyes to a different side of makeup artistry: special effects. It was then she knew she wanted to pursue a career in makeup artistry. After school, Gaby moved to the city of Los Angeles where she studied makeup artistry from her love of books, apprenticing, attending university, workshops and the “school of hard knocks.”

After several years in Los Angeles, Gaby moved back to her hometown in Miami to work in theater and performed makeup for various tv and film projects including Tattoo Nightmares Miami.

In 2014, Gaby moved to Atlanta, Georgia and began apprenticing in special FX, helping fine-tuned her craft for film, television and photography. She’s skilled in concept and design of HD beauty, corrective, prosthetics, injury simulation, hair laying and ventilating wigs, airbrushing, and period makeup. She has hands-on experience with prosthetic application, latex, gelatin and silicone applications. Her love of the craft and continuing education keeps her engaged in the latest techniques, styles, and products. 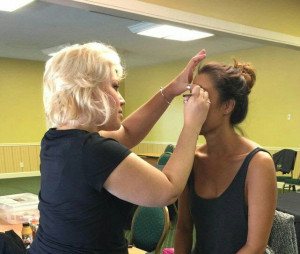 Because of the fast-paced environment, Gaby is excellent at managing her time wisely whether attaching prostheses to performers and applying makeup in order to create special features or special effects such as scars, aging, or illness; designing, sculpting and making prostheses that can be used to change performers’ appearances; altering or maintaining makeup during productions as necessary to compensate for lighting changes or to achieve continuity of effect; or provide performers with makeup removal assistance after performances have been wrapped.

Gaby loves what she does and it shows in her passion for the craft she has worked so hard to perfect.